Configuring Remote Desktop (RDP) from a host Hyper-V machine to a guest virtual machine can be tricky, so this post is dedicated to the issues and resolution steps I went through to allow RDP.  Cutting to the point, below are the things to look for followed by some explanation about my scenario if you care to read.  This is not an exhaustive list of what is required, just the items that were causing problems for my particular scenario.

Ever since I began running Hyper-V I haven’t been able to RDP to my guest VMs which means the resolution for my connection windows ha been limited to what the native Hyper-V connections allow.  During personal use I can put the resolution up to 1152 x 864, but during presentations I am usually limited to a measly 800 x 600.  That is until today when I decided to fully investigate why I couldn’t connect via RDP.

First a thank you to John Ross (@johnrossjr), Christina Wheeler (@cwheeler76) and Clayton Cobb (@warrtalon) for various suggestions while I was researching tonight.  As it turns out I had not 1, not 2, but 3 items preventing me from using RDP.  Let’s dig into the requirements above.

This item I had previously taken care of, but it bears repeating because by default Windows Server 2008 R2 does not allow RDP connections.  Change the setting from “Don’t allow…” to whichever “Allow connections…” setting suits your needs.  I chose the less secure option as this is just my dev laptop. 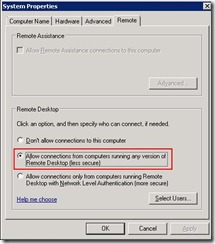 When I originally configured my VMs I configured each to use 2 network adapters: one using the physical ethernet adapter for internet use and a virtual private adapter for communication between the VMs.  The connection for the ethernet adapter is an “”External” adapter and (as my co-worker Kelly Jones pointed out in comments below) does allow connections between host and guest.  After he pointed this out though I realized that my ethernet adapter is not always reliably enabled (power cord not in disables NIC.)  As such I need a secondary adapter that will always be on to connect the host and guest.  The virtual private adapter I had allowed communication ONLY between the VMs and not to my host.  There is a third option “Internal” which allows communication between VMs as well as to the host.  After finding out this distinction I promptly created an Internal network adapter and assigned that to my VMs.

Seems like a pretty common sense thing, but in order to allow remote desktop connections the target computer must able to be found by the source computer (explained here.)  One of the settings that controls if a computer can be found on the network is aptly named Network Discovery.  By default Windows Server 2008 R2 turns Network Discovery off for security purposes.  To enable it open up the Network and Sharing Center.  Click “Change Advanced Sharing Settings” on the left.  On the following screen select “Turn on network discovery” for the currently used profile and click Save Settings.  You may notice though that your selection to turn on network discovery doesn’t save.  If this is the case then you most likely don’t have the supporting services running (as was my case.)

There are a total of 4 services (listed again below) that need to be running before you can turn on network discovery (explained here.)  The below images highlight these services.  In my guest VM I found that I had DNS Client already running while the other 3 were disabled.  I set them all to enabled and started the ones that were stopped.  After this change I returned to the Sharing settings screen and found that Network Discovery was turned on.  I’m not sure whether this was picking up my attempt to turn it on previously or if starting those services turned it on.  Either way the end result was a success.

Before and After Results

The first image is the smaller square shaped viewing window used by the Hyper-V native connection.  The second is the full-screen RDP connection in all its widescreen glory. 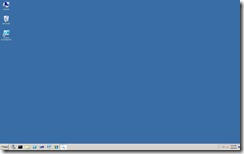 Over the past few months I’ve found Hyper-V to be very useful for virtualizing my development environments, but I’ve also had a steep learning curve to get various items configured just right.  Allowing RDP connections to guest VMs was one area that I hadn’t been able to get right for the longest time.  Now that I resolved these issues I hope that others can avoid the pitfalls that I ran into.  If you know of any other items I left off feel free to let me know.