This post is a bit more personal than most.  Two weekends ago my fiancé and I (along with two friends) completed our first 5k run.  To many people this may not sound like a big deal, but to me it was a very significant event.  Below is the story why.

When I was a junior in high school I started to have pain in my right hip when I ran or was on my feet for extended periods of time.  At the time I was in track doing shot put and discus which are very demanding on your leg joints and muscles.  When the pain didn’t go away for days and was uncomfortable just walking or sitting I decided to get it looked at by a doctor.  The doctor took a number of X-rays and performed various mobility tests.  Upon reviewing the X-rays it was clear what the problem was.  My right hip joint was not properly formed.  Specifically the socket portion of the “ball and socket” connection was under-formed and thus the ball portion slipped around causing inflammation.  To the best of my memory he called it hip dysplasia.

This is a somewhat common issue with newborn babies where the hip joints aren’t properly aligned or the ball remains out of the socket.  In most cases some quick tests and manual adjustments pop the hip back into place.  Apparently this wasn’t the case for me.  At the time the doctor told me that I would need a hip replacement by the time I was 40-45, but to continue exercising and avoid any activities that caused pain.  For me that meant no more running or climbing large amounts of stairs.

Fast forward to a few years ago, I read an article discussing different running styles.  One that stood out to me was toe running.  Instead of landing on the heel (and absorbing all the shock with your bones) you focus on running on the ball or toes of your feet (and thus absorb the shock in your muscles).  For a year I started to walk on the balls of my feet rather than the traditional heel to toe stride.  I noticed a decrease in my hip pain as well as increased calf muscle strength.  I then tried running on my toes and found it to be much easier than expected.

I joined my fiancé’s gym at the beginning of this year intending to lift weights and do some minimal cardio.  I started out with running half a mile and worked my way up to 2 miles.  In Feb I found out the gym was holding a 5k run / walk for charity.  I thought this would be a great opportunity to see if I could run the full race and not have hip pain.  Sarah and I trained over the next few months increasing our distance and lowering our pace per mile.

On April 27th, 2013 Sarah and I ran our 5K.  I finished with a time of 32:59 (just under 33 mins 🙂 ) and Sarah finished at 34:56.  I’m very proud of both of our times and for completing.  The icing on the cake was that I had very minimal hip pain after the race (and even the days following the race).  The below picture was taken just before our race. 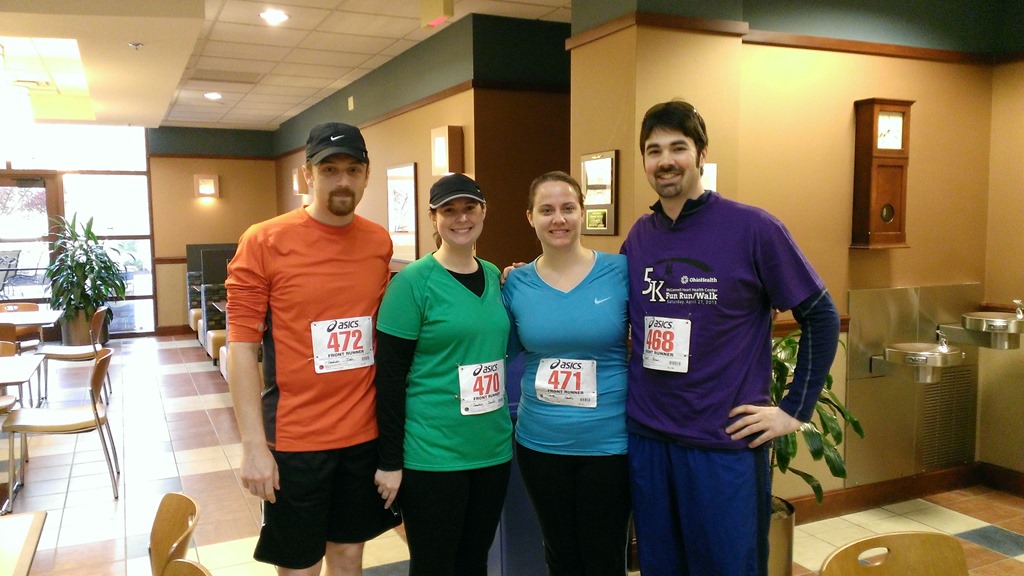 When my doctor told me that I wouldn’t be able to do many things that I enjoyed when I was younger it was discouraging.  Thankfully through changing the way that I walk, run, and get around I’ve found ways to cope with my hip issue.  I may still have to have an early hip replacement, but the fact that I could complete a 5K (with Sarah’s help and motivation) was a big boost to my confidence that I won’t let that keep me down.  Now to find the next race and continue on!